Avenida dos Aliados is the central avenue, or should we say square, that serves as Porto’s Living room. An area for celebrations of every kind and it’s waiting for you. 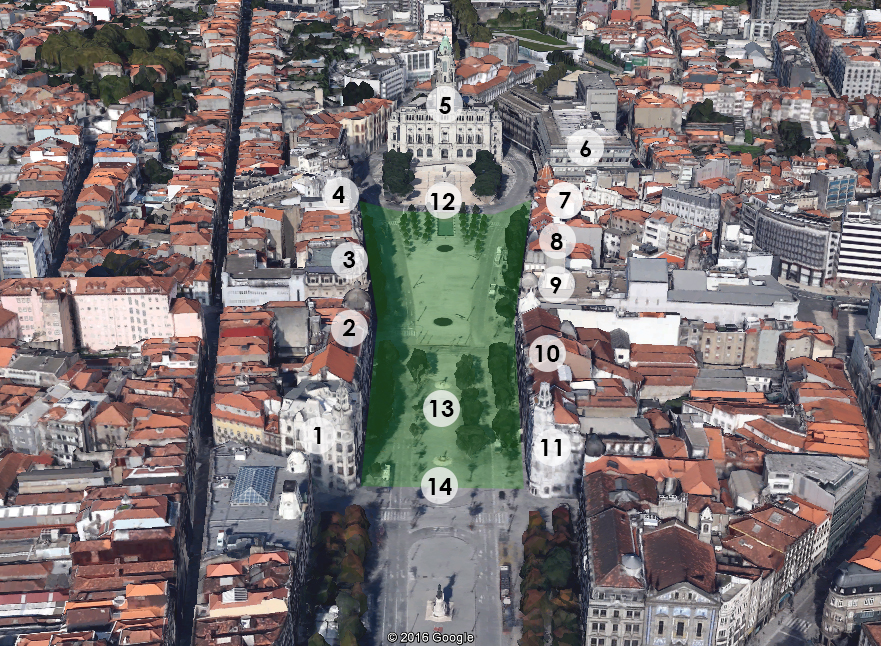 Avenida dos Aliados is the green area of the map. Thank you, Google!

In 2005, Siza Vieira and Souto de Moura, two local architects and Pritzker Prize Winners, started the requalification of Avenida dos Aliados. Taking advantage of the huge crater created by Metro do Porto, they turned a beautiful garden into a gray clean and functional space. Most of Porto’s locals tend to say that it was a crime and that it was better with all the green, but one thing we should admit, it is easier and cheaper to manage the present structure rather than “burning” thousands of euros re-doing the destroyed gardens after a celebration.

And we love a good Party! For most of the big events, Avenida dos Aliados is the chosen spot: receiving the Pope or the Queen of England; New Year’s Eve or São João huge party; celebrating FC Porto’s victories or serving as an enduro bike paddock. The avenue is easily adapted to all events and has enough space for a concert, fireworks or to a huge Christmas tree, and it’s easy to clean too. 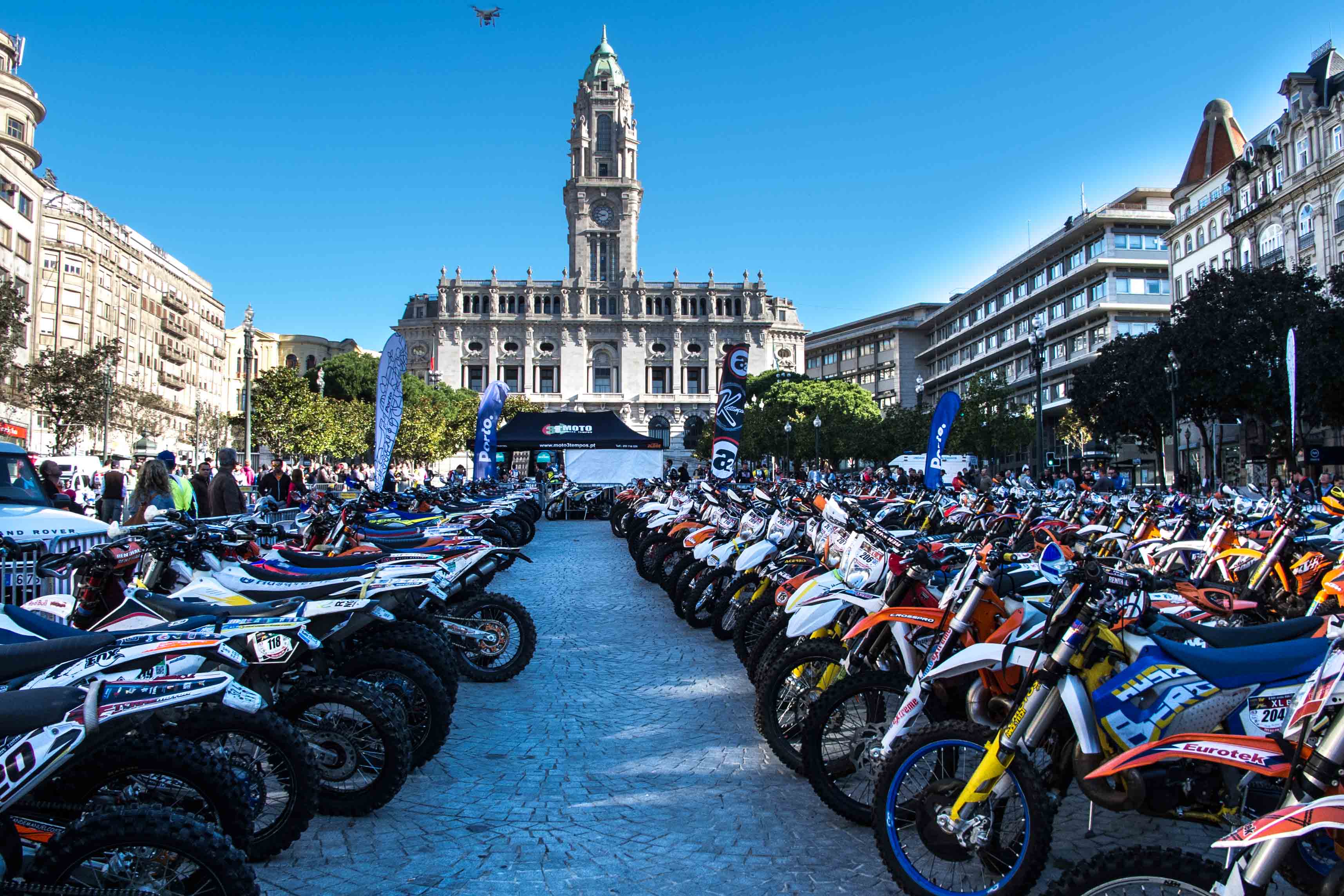 For a huge percentage of locals, is the area that begins in Palácio das Cardosas, home to Hotel Intercontinental, and ends at Porto’s City Hall. In fact, the southern part is Praça da Liberdade, with D. Pedro IV in the center, and the Northern is Praça General Humberto Delgado, in front of the municipality’s headquarters, limited by the junctions of the two diagonal streets, Ramalho Ortigão and Rodrigues Sampaio. Out of curiosity, in a 100 meter (330 feet) radius, counting from the City Hall, there are nine streets, an avenue, and a square.

Avenida dos Aliados (Allies Avenue) gets it’s name from the memory of the victory of the Allied Nations on World War I, in which Portugal participated on the winners side. Barry Parker is the architect/urbanist responsible for the avenue’s design and his plan started to be implemented in 1916 with the demolition of an entire neighborhood called Laranjal, some streets and the building that was known as Paços do Concelho (the old Town Hall). After the demolition, Marques da Silva, S. Bento’s Train Station’s architect, gets involved and creates two buildings that define the South limit, on left the Nacional insurance company headquarters (1) and on the right Joaquim Emílio Pinto Leite Bank(11). He is also the author of Jornal de Notícias (a national newspaper) building (8), a few meters up the street. 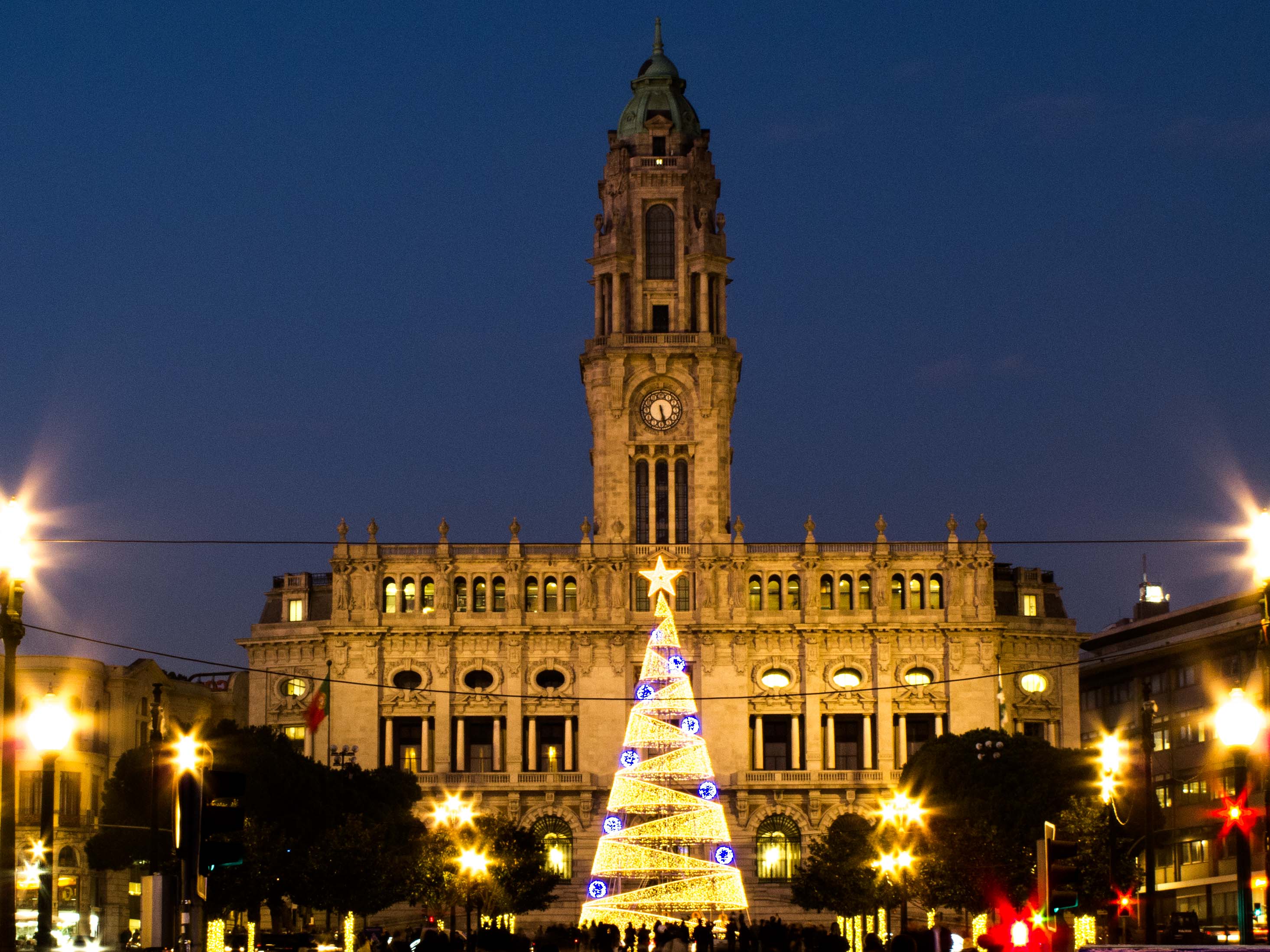 Christmas tree and the Town Hall

Similarly, Júlio de Brito creates two buildings that limit Avenida dos Aliados North side, on the left a building for Garantia insurance company (4), today Axa, and on the right another for Companhia de Fiação e Tecidos de Fafe (7). It is easy to understand that this prime area is the right spot for banks, insurance companies, and newspaper offices, but how to explain the presence of a textile industry company? If we think that in 1926 this company had in Fafe, then a small village, a kindergarten for 200 children, a nursery, and a primary school, we immediately acknowledge their economic power and the integration in Avenida dos Aliados revealing, also, the strength of the textile industry in the North of Portugal.

Avenida dos Aliados was Porto’s economic center, nowadays located in Boavista área, and had a lot of offices, insurance companies, and banks. One of the surviving Caixa Geral de Depósitos (9), the nationally held, which was conceived and finished in 1932, with Pardal Monteiro’s design. Still operating in the same location, also houses the financial group’s art gallery, Culturgest in a magnificent room that alone is worth a visit. Closeby, down the street, Montepio Geral (10), another bank, also hosts free art exhibits. 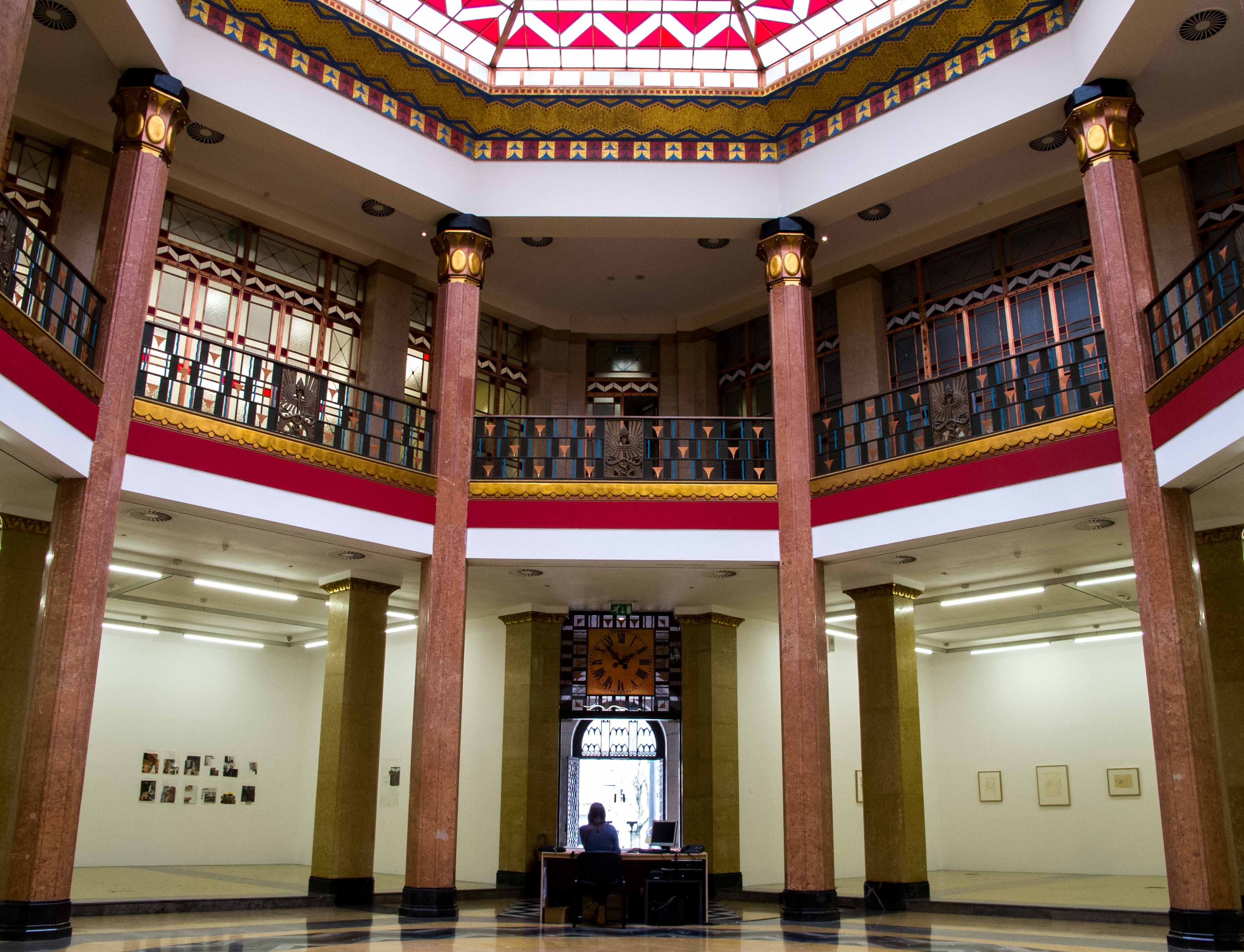 Across the street, on the corners of Rua Elísio de Melo, we can find the building that was Comércio do Porto newspaper headquarter’s (3), from Rogério de Azevedo, and on the opposing side Café Guarany (2), by the same author, which holds an interesting bas-relief from Henrique Moreira.

In the central part of Avenida dos Aliados, starting on the South side, we can find three sculptures: A Juventude (youth), aka Naked Girl (14) sitting in a column that flows water through four masks that symbolize the Four Seasons; Abundância (abundance) aka the Boys(13) that one were golden, not green. In Praça General Humberto Delgado, guarding the City Hall with his words, Almeida Garrett (12), a 19th-century novelist. The first two were created by Henrique Moreira and the third by Salvador Barata Feyo. 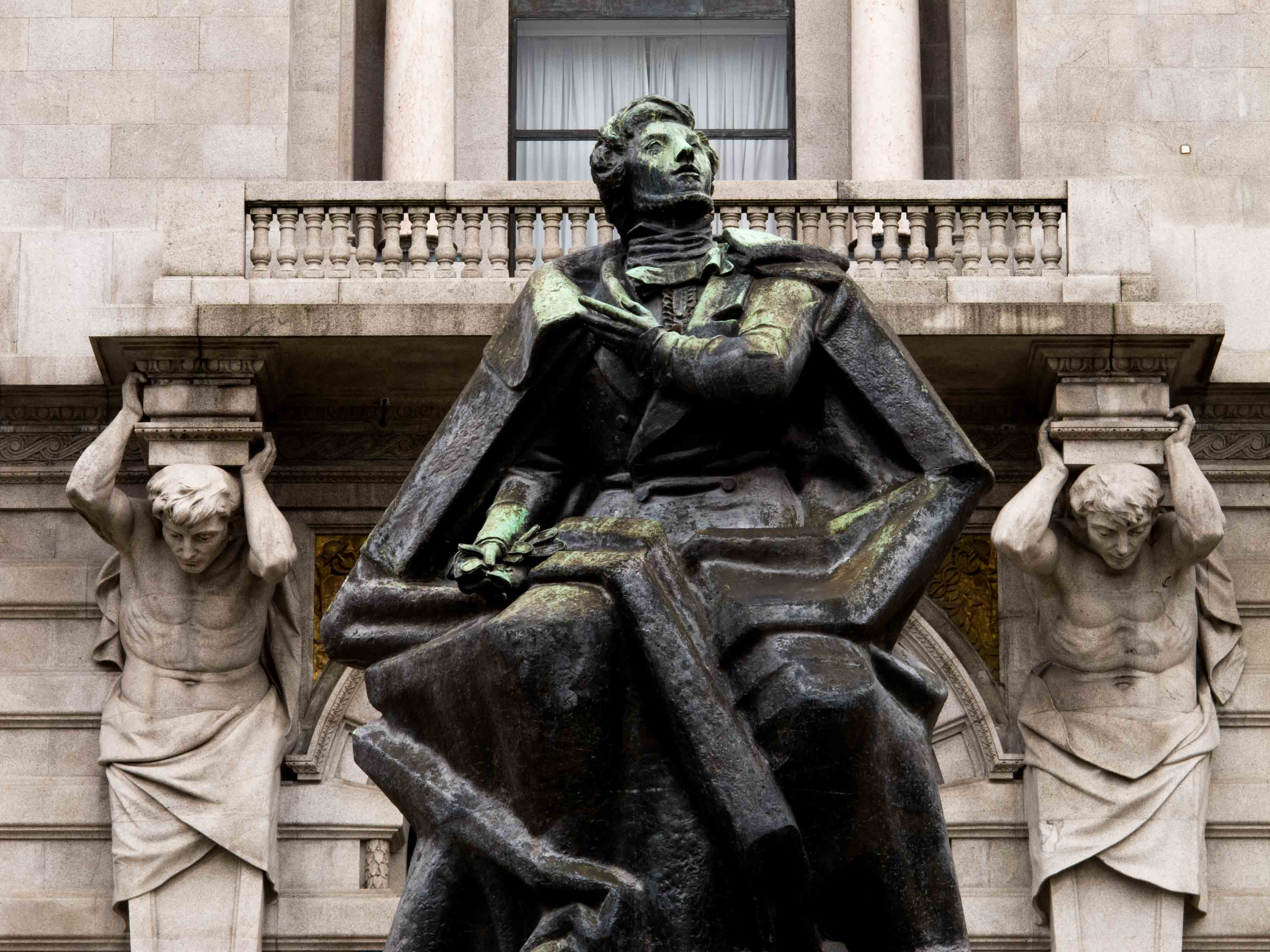 Porto’s Town Hall was completed in 1955 with a project that took 35 years and needed two architects to have it finished, Correia da Silva and Carlos Ramos. Ramos is also the architect responsible for the neighbor Palácio dos Correios (6) which is an extension of municipal services. About the City Hall, you can go in and visit the entrance hall and enjoy the romantic style paintings on its roof, highlighting the Lady of Vandoma, patroness of the city. Here too we find the ubiquitous Henrique Moreira, with two sculptures at the sides of the stairway, representing Industry and Art. This same sculptor is responsible for the caryatids on the right side of the building’s façade, the other six were designed by Sousa Caldas which in turn is the author of the Genius of Independence, the winged figure with a broken chain in his right hand and a flag on his shoulder, that stands on top of the aforementioned building of National insurance company (1).

Avenida dos Aliados was adapted to the needs of its citizens, in the past Romantic and colorful, today opened to the World and to a world of events. The last intervention, conducted by two Pritzker prize winners, funded by Metro do Porto, brought new ideas and possibilities. One can defend that the gardens had more color and made people happier but, who as a garden in its living room? In my opinion, evolution is needed and if we cry about this transformation, we would have to do the same about what Avenida dos Aliados project destroyed: Praça de D. Pedro and its amazing limestone pavement, Hotel Francoforte, and the magnificent Café Chaves… 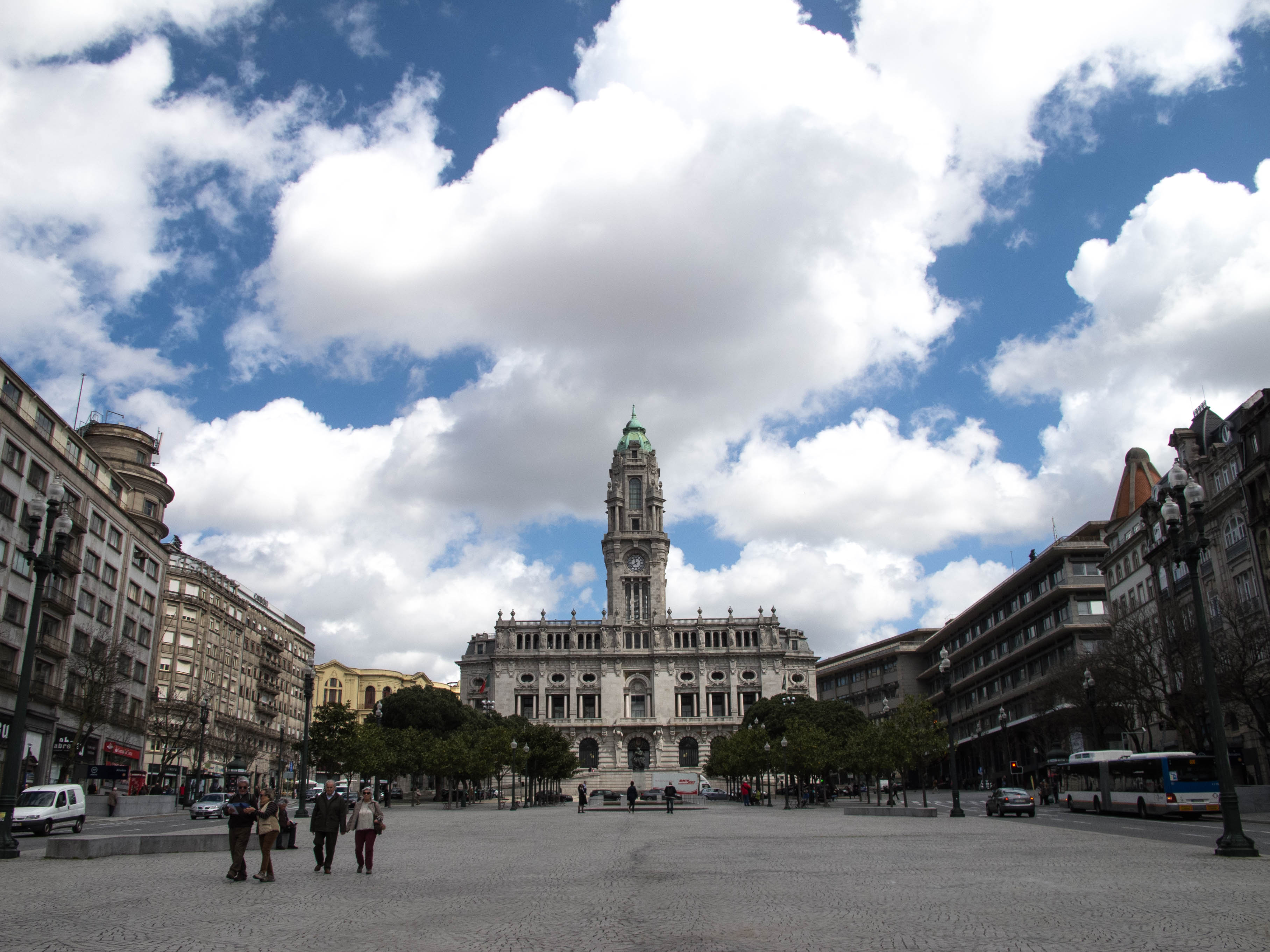 Avenida dos Aliados has a lot of secrets that we cannot describe here so, we suggest that you join us in our Porto Beginners Guide, we will try to tell you everything!