During Holy Week in Porto churches and house balconies are decorated with purple colors to celebrate the Lord’s Passion. There are no organized processions but we suggest a unique Via Crucis.

Holy Week in Braga is the most famous in Portugal and, during the celebration of the Passion of Christ, accommodation in the city is usually fully booked. A good solution is to use Porto as your home base and go back and forth with train rides – €6,20 roundtrip, one-hour duration, every hour.

During Holy Week, in Porto, there are no public processions, but there are other ways to relive the episodes of Via Dolorosa. In Clérigos Church, built in the eighteenth century and known for its omnipresent tower, there’s a museum with an interesting collection of religious art. While  celebrating the 250th anniversary of its construction, the Clérigos Brotherhood  opened the Old Hospital and the Brotherhood’s headquarters to the general public.

In this area, you can find the Christus collection which was drawn from a donation of António Manuel Cipriano Miranda, collector and passionate of Christian iconography, who decided to enrich Porto’s heritage, through Clérigo’s Brotherhood, with 400 (!!!) representations of Christ.

It is in this environment that we can make our Via Crucis during Holy Week, a route, short but intense, that shows the before and after of the Way of the Cross. 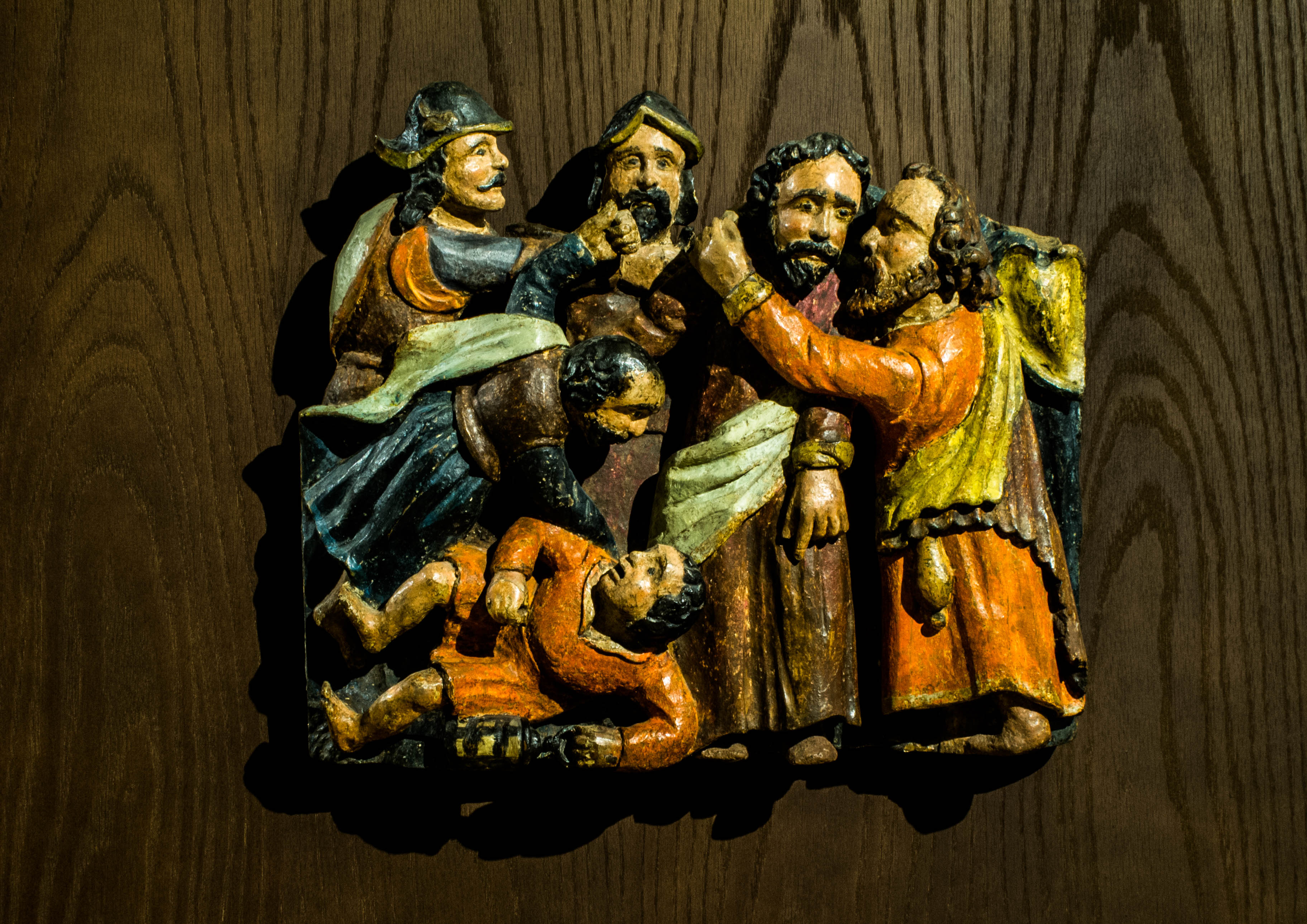 On the right dressed in orange, Judas with a bag of 30 pieces of silver kisses Jesus; On the left, the soldiers who come to arrest Jesus; Below, on the same side, one of the companions of Jesus cuts an ear to one of the captors.

«While he was still speaking, Judas, one of the Twelve, arrived. With him was a large crowd armed with swords and clubs, sent from the chief priests and the elders of the people. Now the betrayer had arranged a signal with them: “The one I kiss is the man; arrest him.”  Going at once to Jesus, Judas said, “Greetings, Rabbi!” and kissed him. Jesus replied, “Do what you came for, friend.” Then the men stepped forward, seized Jesus and arrested him.  With that, one of Jesus’ companions reached for his sword, drew it out and struck the servant of the high priest, cutting off his ear.»

With this action, Judas Iscariot sets in motion the events that will lead to the Passion of Christ. Later, as all who betray, Judas repented and, although Forgiveness is one of the foundations of the doctrine of Christ, nothing prevents them traitors to resolve matters into their own hands.

«When Judas, who had betrayed him, saw that Jesus was condemned, he was seized with remorse and returned the thirty pieces of silver to the chief priests and the elders. “I have sinned,” he said, “for I have betrayed innocent blood.” “What is that to us?” they replied. “That’s your responsibility.”  So Judas threw the money into the temple and left. Then he went away and hanged himself.» Matthew 27, 3-5.

Flagellation of Christ with the corresponding iconography: the Column, the Whip and Rope, three of the Instruments of the Passion.

Flagellation was often represented over the centuries, whether in painting or sculpture, by the likes of Caravaggio and Piero della Francesca, is one of the key scenes of Holy Week. However, in the Gospels it’s never referred as Flagellation but “flogging”.

Jesus carries the cross before Veronica

Jesus carries the Cross and below, at the left corner, Veronica holds her Veil

Santa Veronica is celebrated on Shrove Tuesday or Mardi Gras, which marks the beginning of Lent. The Veil of Veronica is a relic that, according to information that began to circulate in the 8th century, was used to clean Jesus face during the Lord’s Passion, marking the Holy Face the fabric.

Traditionally associated with the station number 6 of the Way of the Cross, Veronica’s representation is not confirmed by the Gospels. Popularized in the 12th century and supported by many Popes, this legend has taken a strong role in the Christian religion and was widespread.

Jesus is taken down from the Cross

Descent from the Cross – low relief in gilt – XVII-XVIII Centuries

Descent from the Cross or The Deposition of Christ or Jesus is taken from the Cross and given to his Mother down, are possible titles for the episode described by John in 19,38, which corresponds to the 13th station of the Via Dolorosa.

«Later, Joseph of Arimathea asked Pilate for the body of Jesus. Now Joseph was a disciple of Jesus, but secretly because he feared the Jewish leaders. With Pilate’s permission, he came and took the body away.»

In this representation we see a soldier receiving Jesus Body wich is held down by Joseph of Arimathea, as Mary is comforted by Mary Magdalene.  Joseph became a legendary character in the fourth century and, later in eleven and twelve centuries, was associated with the Holy Grail and King Arthur, the foundation of the first church in England (Glastonbury) and, in Spain, the consecration as bishop by Saint James.

Pietá, or Mary holding the body of Jesus

The Pietá or Lamentation of Christ represents the moment when Mary receives her Son’s Body after the Descent from the Cross. It is a recurring theme of religious art and this the sixteenth or seventeenth-century representation shows the interpretation of a Spanish workshop in a beautiful carved wood work, painted in tempera and gold.

You cand find all of these art works and much more in Christus collection, during Holy Week or any other week, for just 3 euro. With this bargain you have, included, the climb to the Tower and to the Church upper levels.

Holy Week begins on Palm Sunday and culminates with Easter Sunday, with the Maundy or Washing of the Feet and Last Supper on thursday, the Lord’s Passion, on Good Friday evoking the death of Jesus.