Gentrification is a threat to Porto’s identity and now is the time to prevent it. Porto has an authenticity that can’t be lost and locals are the prime actors to avoid it.

The word of 2015’s silly season in Porto is gentrification, but are we using it properly?

Gentrification is defined as the buying and renovation of houses and stores in deteriorated urban neighbourhoods by upper or middle income families or individuals, thus improving property values but often displacing low income families and small businesses.

What we are seeing is Porto is a little bit different, and we already have good and bad examples. Read Boston’s example here.

Porto’s City Center is suffering a big pressure from the increasing of tourism related businesses. Every week there’s new tourist apartments, restaurants, bars, hotels and tour operators opening their doors to the growing numbers of people eager to know a little bit more about Porto, Portugal’s second City, and, nowadays, one of the trendiest spots in Europe.

Gentrification sticker in one of the walls in Candelabro Bar one of the trendiest in town.

To comply with the need of accommodation, food and cultural activities, Porto needs these businesses, but, also, the authentic and eye-catching traditional places. What makes us special is the endless number of amazing Tasca’s – not the updated version #faketasca – the cosy family run restaurant – not the upscale-fusion-all-white-IKEA version; Bolhão Market with a clean face and its traditional sellers and not an upscale gourmet version; the nice buildings with tiles and traditional colors; authentic hospitable people communicating in a mix of different languages, including gestures; Great food with great ingredients that can be found easily and not gourmet/fusion food.

Of course Porto will survive with a healthy mix of everything mentioned above, but we don’t want it to be transformed into another Paris, Rome, or Barcelona. Porto is Porto and we can’t go against it. 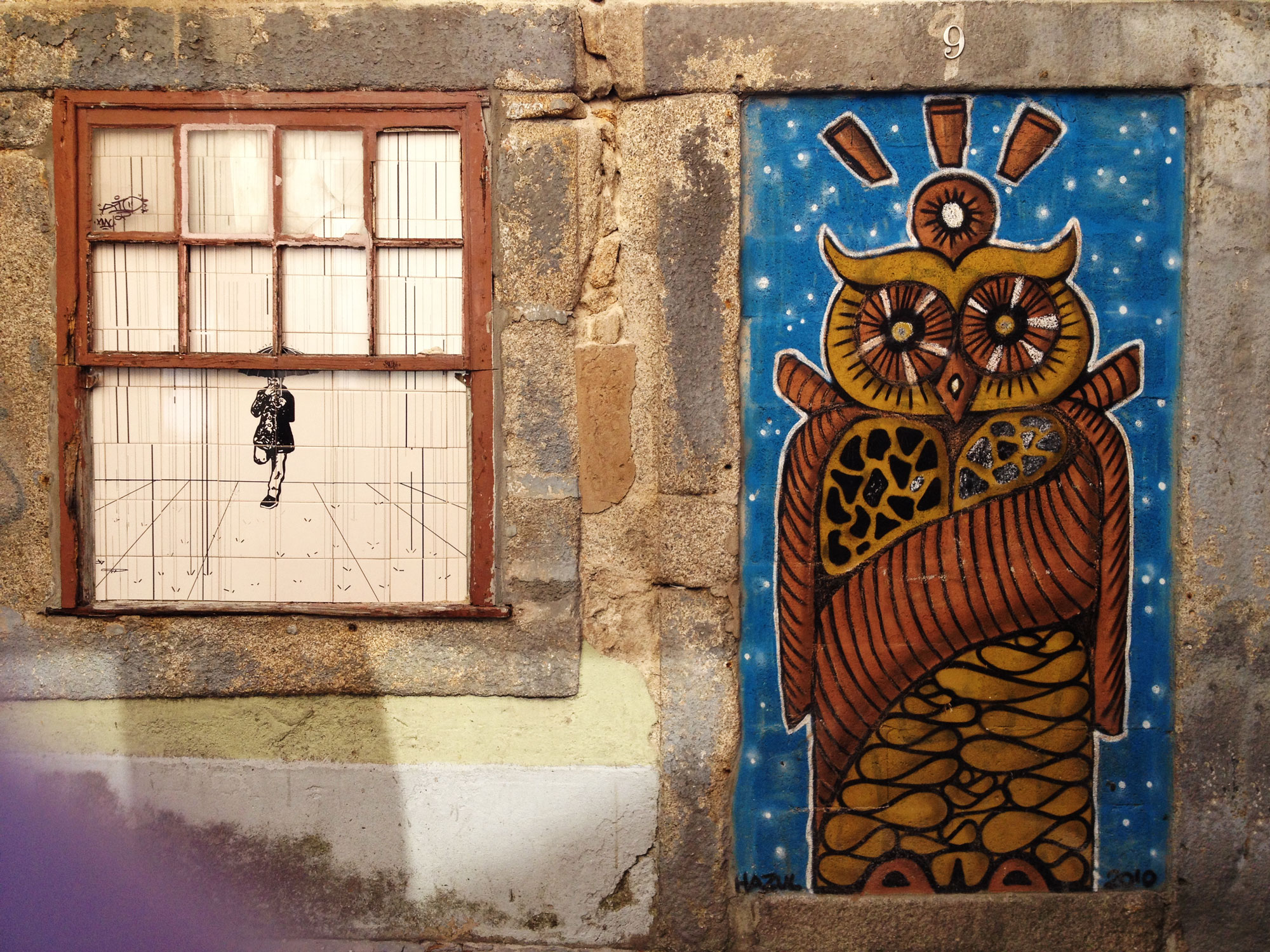 Street artists like Hazul, use abandoned building’s door frames as a canvas to murals

Some small businesses are already taking the next step and renovating. Also, some are closing forever, but basically because the owners were offered a large sum of money to close their doors. I know of three cases and the owners are older and at retiring age. They had a golden opportunity to get a lot of money to spend their golden years in peace.

A different example is a restaurant that was decrepit and the owners too old – in their 70’s. The grandchildren took over, renewed the space and now run a very successful restaurant, updated but with the same values. If you go there the grandmother still helps shinning the cutlery…

In my opinion, buildings have to be renewed and we can’t comply with the real estate lobbying. Prices have to be fair so that the landlords won’t be tempted to expel the real people that live at the city centre. Of course, one might say that this speech is very poetic and people need money, but if there’s some kind of rent control, local businesses won’t be overshadowed by big hotels, big restaurant chains, and local businesses will renew with their own effort and time. Time and patience…