Palácio da Justiça in Porto holds a mystery waiting to be solved. Justice is not blind and there’s a good reason to it.

Palácio da Justiça (Palace of Justice) in Porto, is a monumental building, near to Torre dos Clérigos and Jardim da Cordoaria. It was created by Raúl Rodrigues Lima and inaugurated in 1961, holds Porto’s Appeal Court and it is a kind of modernism informal museum, with sculptures and paintings by Portuguese artists. On this site, before Palácio da Justiça existed the Fish Market, whose inheritance was taken by Mercado de S. Sebastião, close to Sé Cathedral.

Palácio da Justiça was designed following the architectural rules of Portuguese dictatorship, Estado Novo, monumental, with classicist and austere features, intended to underline the power of the State and the Force of Justice. Like all the buildings designed under a Fascist regime, this one has symbolism all over, from the semi-circular typical basilical plan of the Roman courts to the wide staircase of the main façade that reminds us the entrance of classical temples. In between the pillars, which divide the façade, we find a symbolic representation of the Sources of Law, designed by Salvador Barata Feyo: Doctrine,  Natural Law, Law, Praxis and Jurisprudence. 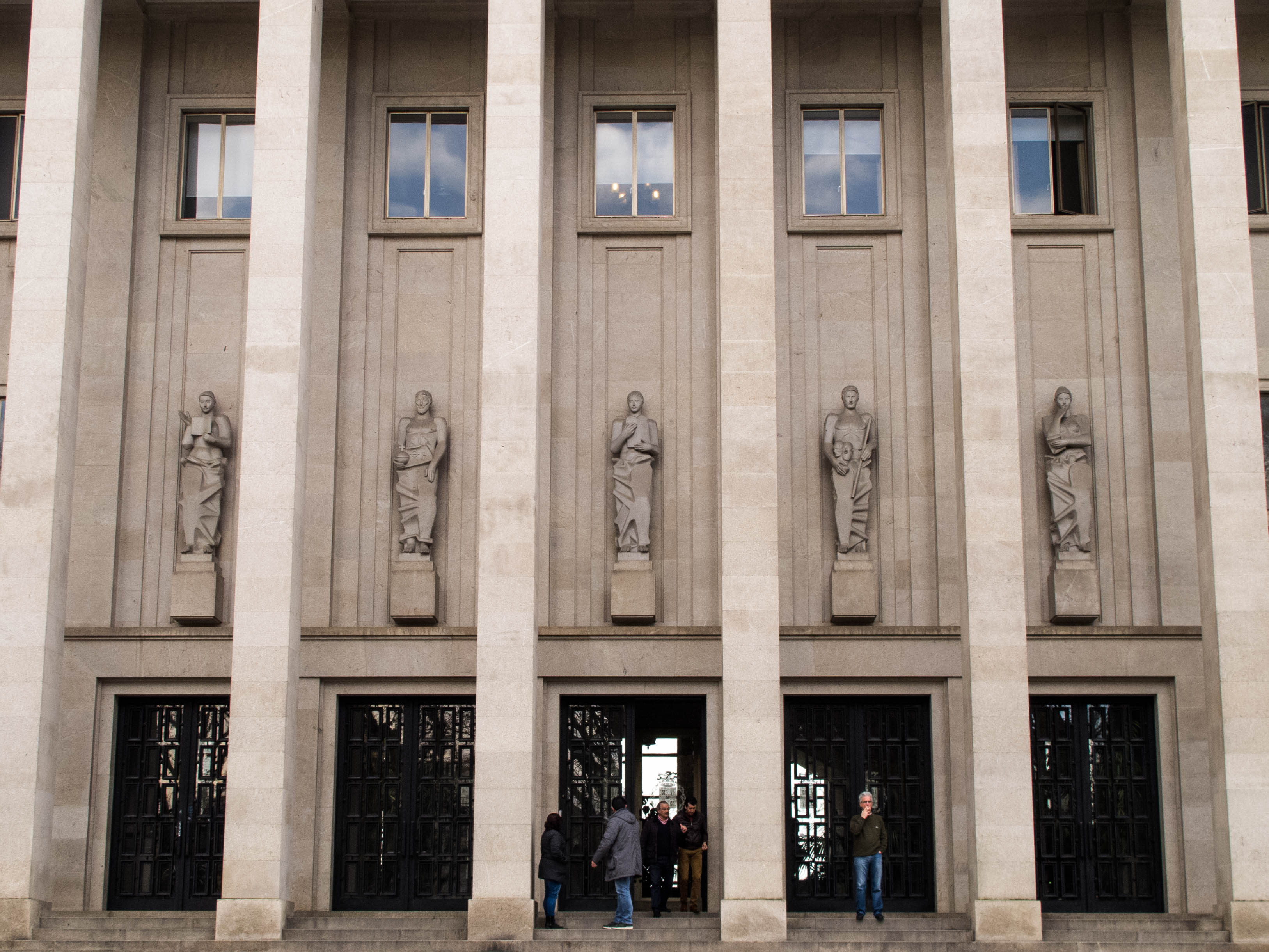 Sources of Law on the façade

On Palácio da Justiça’s left side there’s a statue, seven meters high –  the biggest minted in bronze in Portugal – created by Leopoldo de Almeida, representing greek goddess Themis, commonly known as Justice, in a hieratic classicist posture. Two elements immediately capture our attention, the absence of a blindfold and the scale resting on the body’s left side. Although it is a classic and austere sculpture, the author decided to grant it a touch of modernity representing it with eyes wide open, attentive to changes in legislation and society in perpetual adaptation and not clinging to the shackles of the Past. 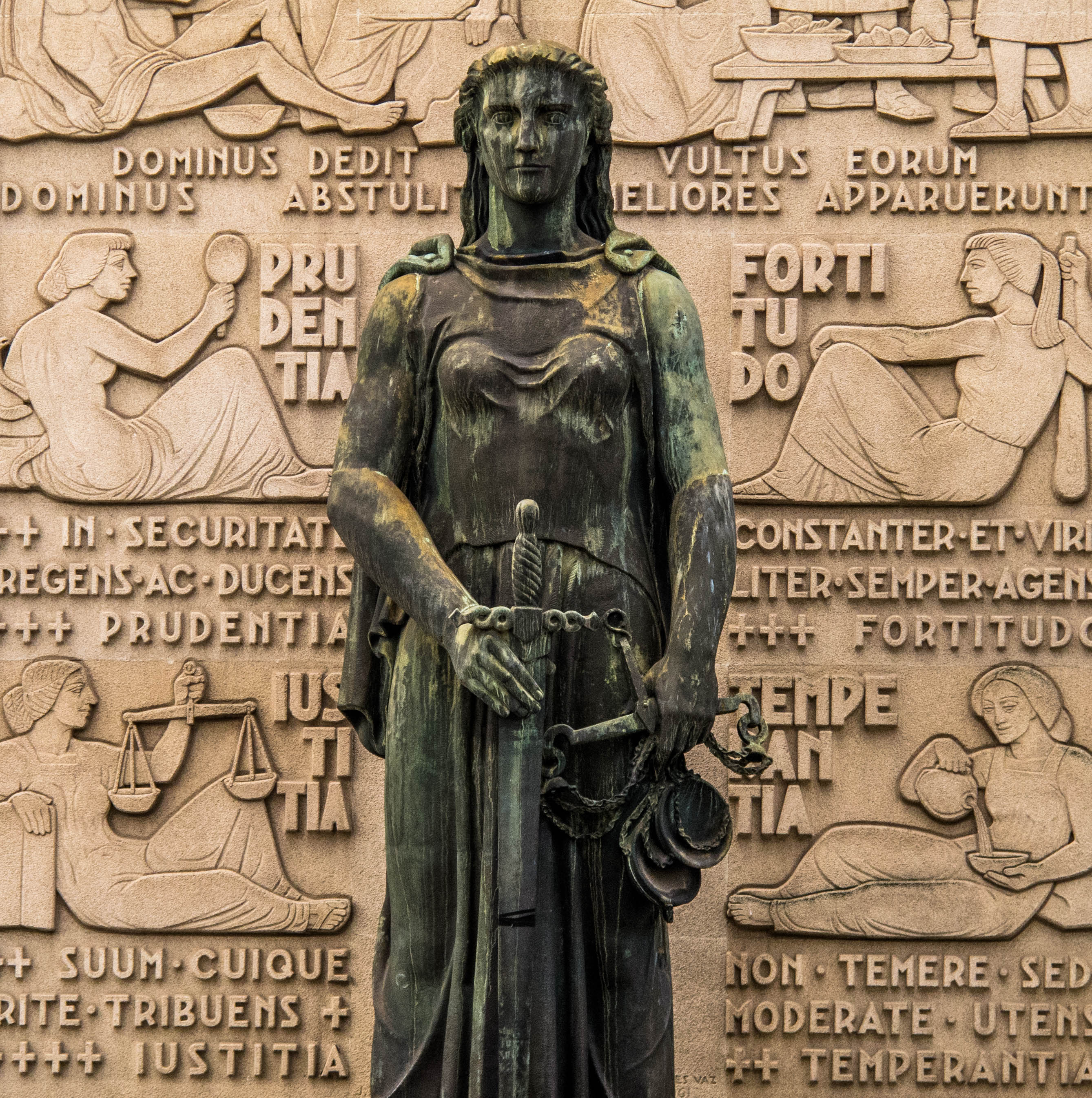 Themis AKA Justice with eyes wide open, and the Cardinal Virtues

Behind Themis, we can admire a fabulous art-deco bas-relief,  by Euclides Vaz, representing the evolution of justice, starting with the Divine Law and ending with the bases of Roman Law. On the top level, Old Testament scenes representing Joseph interprets Pharaoh’s dream; next Moses, after receiving the Tables of the Law, faces the Golden Calf worshipers; on the last line, two episodes of the Book of Job and Daniel.On the lower levels, working as a frame to the statue, the Cardinal Virtues: Prudence, Justice, Courage and Temperance.

Inside the Palace we can find Museu Judiciário (Judiciary Museum), which collects objects related to the exercise of Justice like  a curious fingerprinting, used to identify the prisoners, books of Law including the handwritten version of Ferreira Borges of the first Portuguese Commercial Code, and some famous cases such as the adultery of Camilo Castelo Branco or Zé do Telhado’s process, the Portuguese Robin Hood. 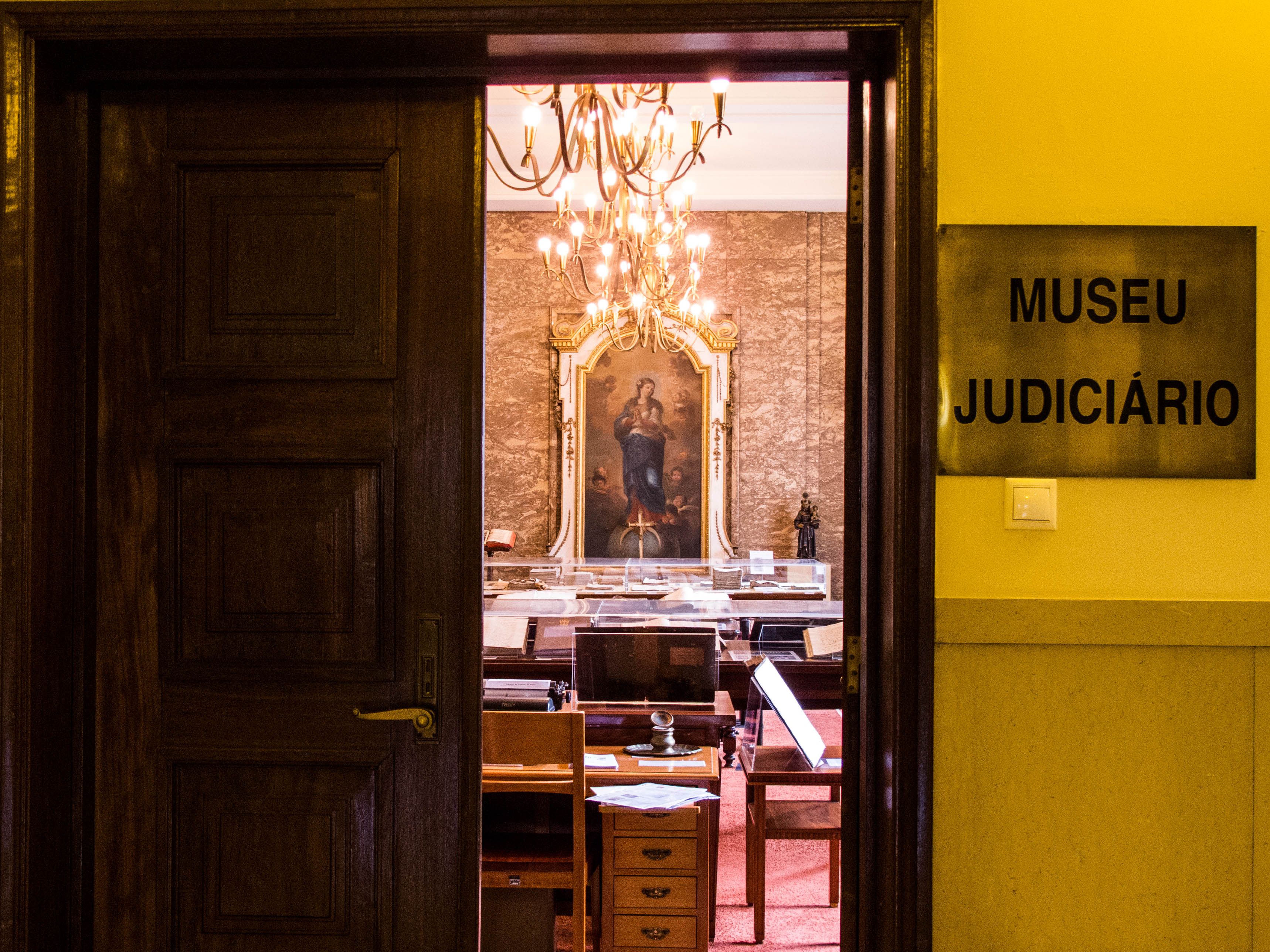 Once inside, in Passos Perdidos, literally lost steps (name designating the areas where people are waiting and losing steps, literally), it is worth investigating the various floors hosting remarkable frescos: on the second floor, the iter criminis (the way the criminal) by João Martins da Costa; on the 3rd floor,  António Figueiredo Coelho painted the final destinations of the human being; and on 5th floor, Porto’s historical episodes by Severo Portela Junior . 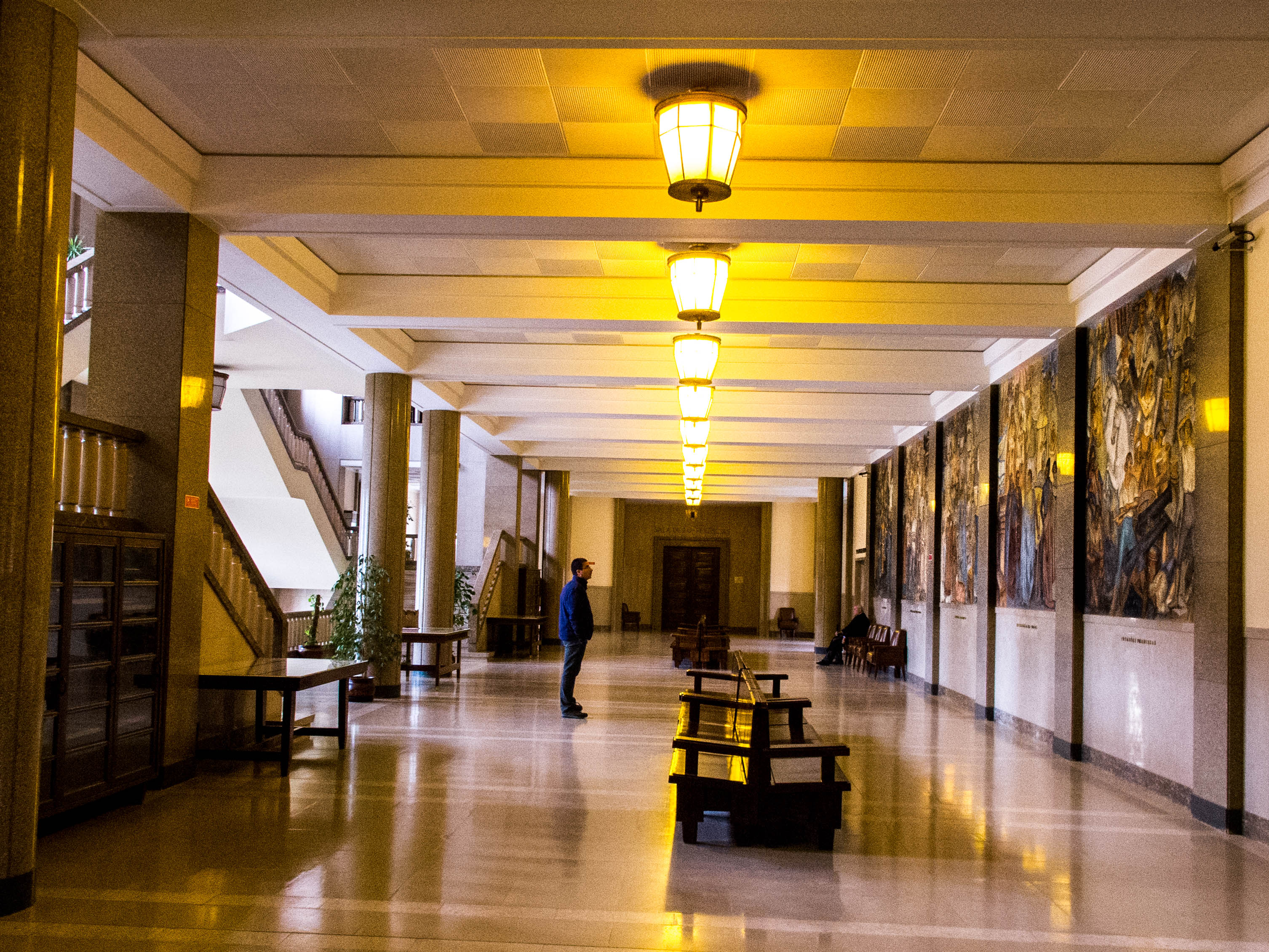 Passos Perdidos are decorated with frescos of three portuguese artists

A lot of people in Porto avoid visiting Palácio da Justiça because they associate  it with the Court and bad events. However, we have to be  fair and say that this building holds an amazing collection and a visit will change people’s mind. You can go solo, or with us in our Porto Beginner’s Guide.