Palácio de Cristal gardens, a nineteen-century creation, is a park in Porto, with fabulous views over Douro River and the perfect place to walk, run, relax, read or even visit an art gallery. 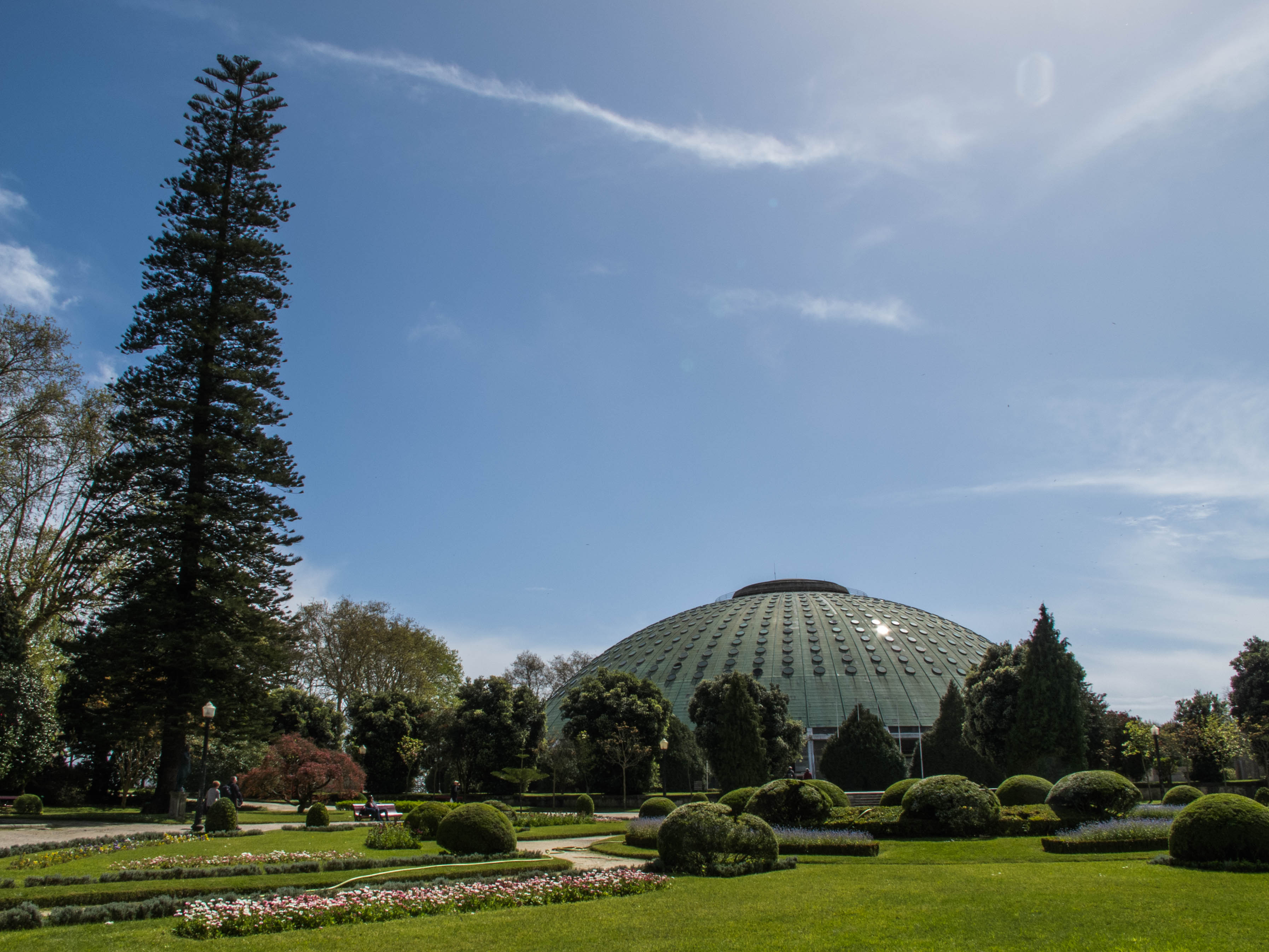 The entrance of the park

Palácio de Cristal gets its name from a glass, iron, and granite structure inaugurated in 1865 for Exposição Internacional do Porto – Porto’s International Exhibition – a World Fair featuring 3,139 exhibitors from four continents. This structure was designed by Thomas Dillen Jones inspired in James Paxton’s Crystal Palace design, a pavilion created in Hyde Park for the 1851 London’s Great Exhibition. In 1951, on the occasion of  1952’s Roller Hockey World Cup in Porto, Palácio de Cristal was destroyed and replaced by the current building, Pavilhão Rosa Mota.

The gardens, designed in English romantic style, from 1864 to 1869, by Émile Davide a German landscape architect,  have a variety of trees and exotic plants spread over eight hectares including lakes, towers, and picturesque walking paths. Upon entering the park, we come across a magnificently landscaped space, with azaleas, camellias, and rhododendrons, decorated with a set of fountains with sculptures of mermaids and mermen and the symbolic representation of the Four Seasons around the central square.

Immediately to the right, at the beginning of Avenida das Tílias, a  modern building holds public library Almeida Garret, opened in 2001 as part of Porto European Capital of Culture. Inside there is a reading room with Portuguese and foreign newspapers and  magazines, a cafeteria and the Municipal Art Gallery, always with very interesting exhibits and with free admission. 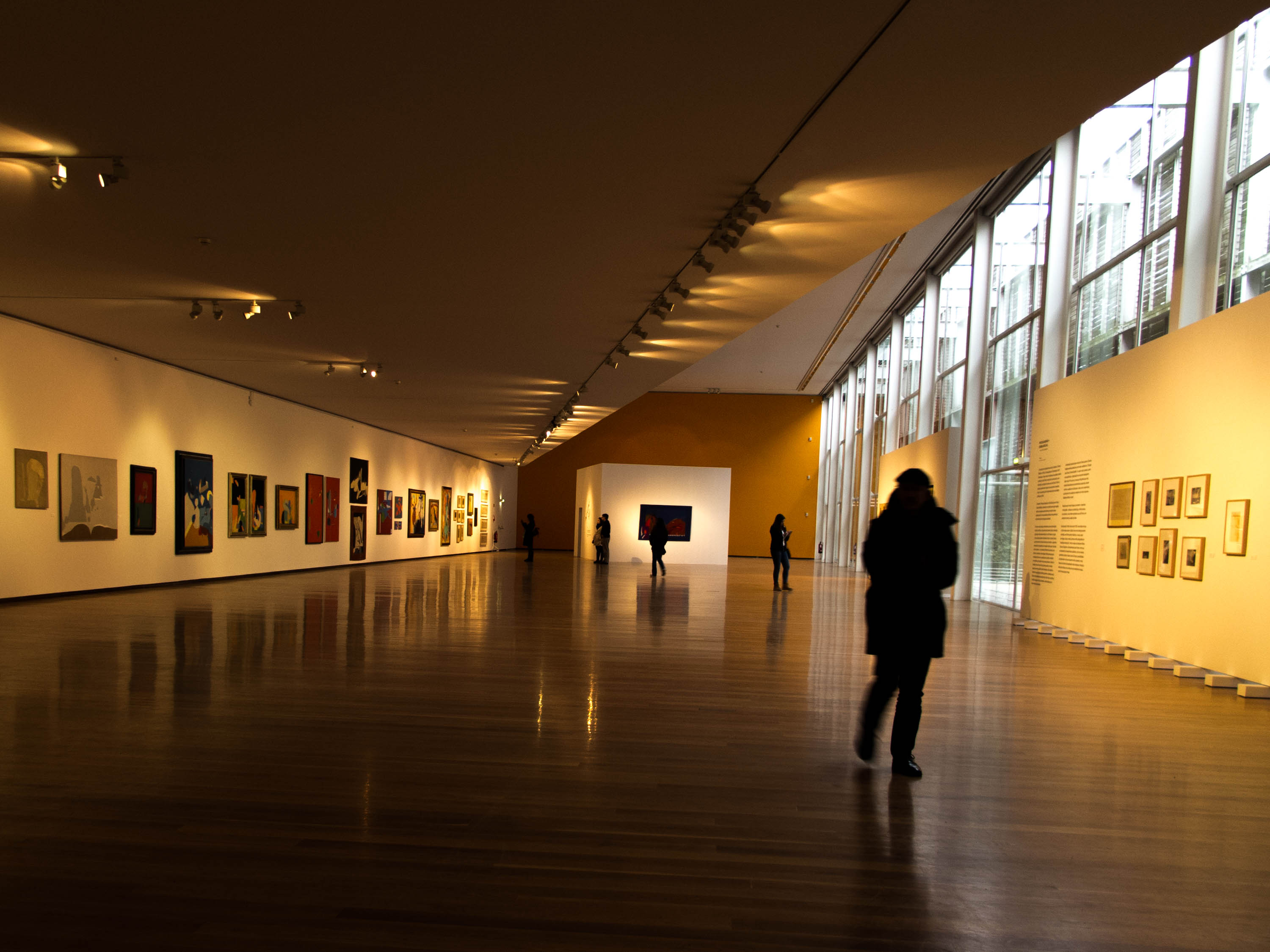 Exhibit inside the Municipal Art Gallery

Avenida das Tílias (Linden Avenue) spreads from Almeida Garret library until Capela de Carlos Alberto, a chapel dedicated to the memory of the King of Sardinia and Piemonte, who died in Porto in 1849, after a brief exile that started in a nearby square with his name. This long avenue, decorated with some contemporary sculptures, is the chosen runway for peacocks always happy to “show off” their amazing fans in front of the cameras and the bright eyes of children. While walking there, take a look at the curious Concha Acústica, a stage designed to project the music and where concerts are still held. 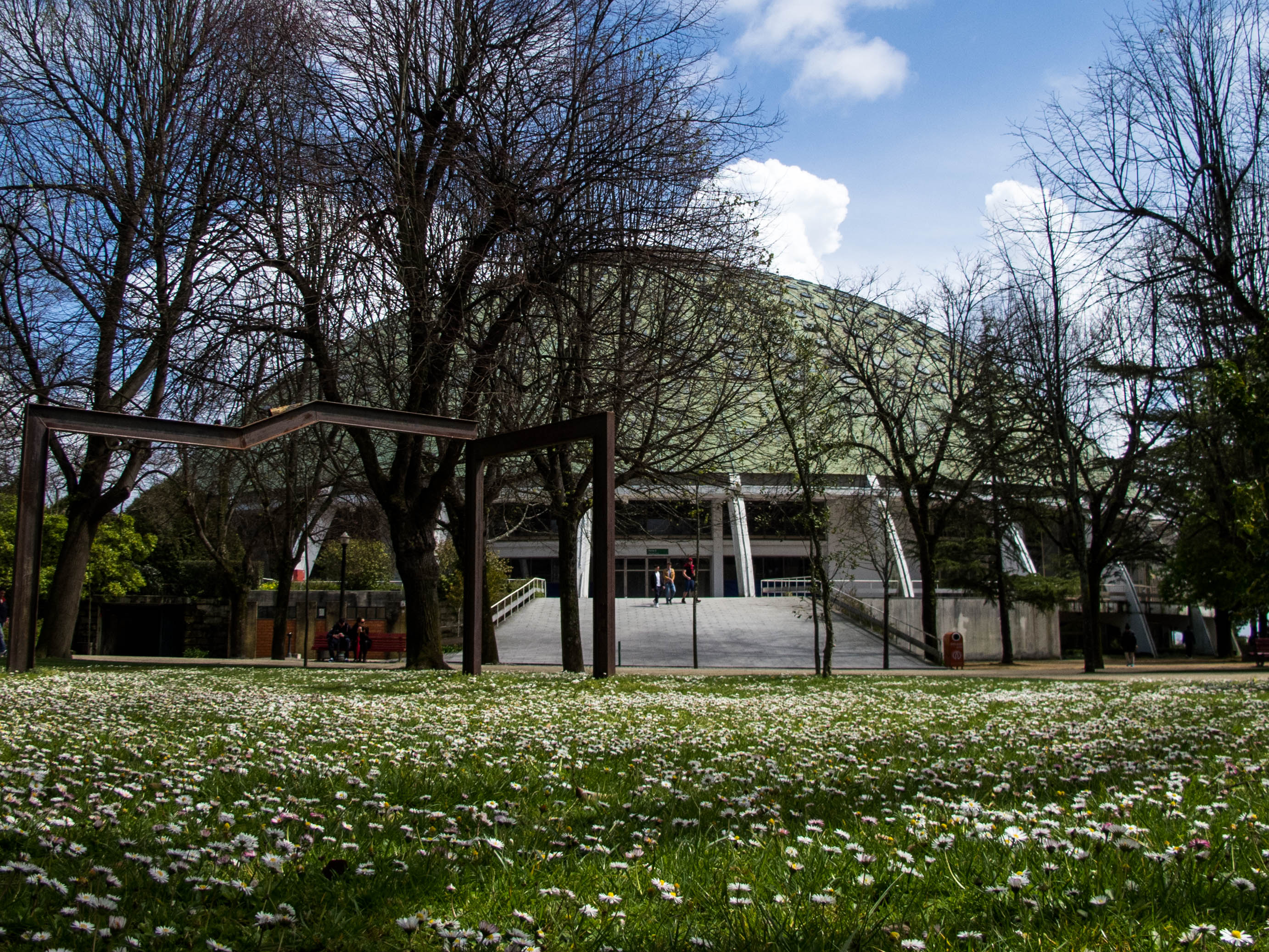 One aspect of the gardens and the dome.

In recent years, in September, Avenida das Tílias has welcomed Feira do Livro do Porto (Porto’s book fair), which was held in Avenida dos Aliados,  and, somehow, it looks like the oxygen revitalized it by giving more prominence to independent bookstores and small publishers.  The truth is that it is an immense pleasure to do some book hunting between the booths filled with books while having a glimpse of the sunset under Arrábida’s bridge. 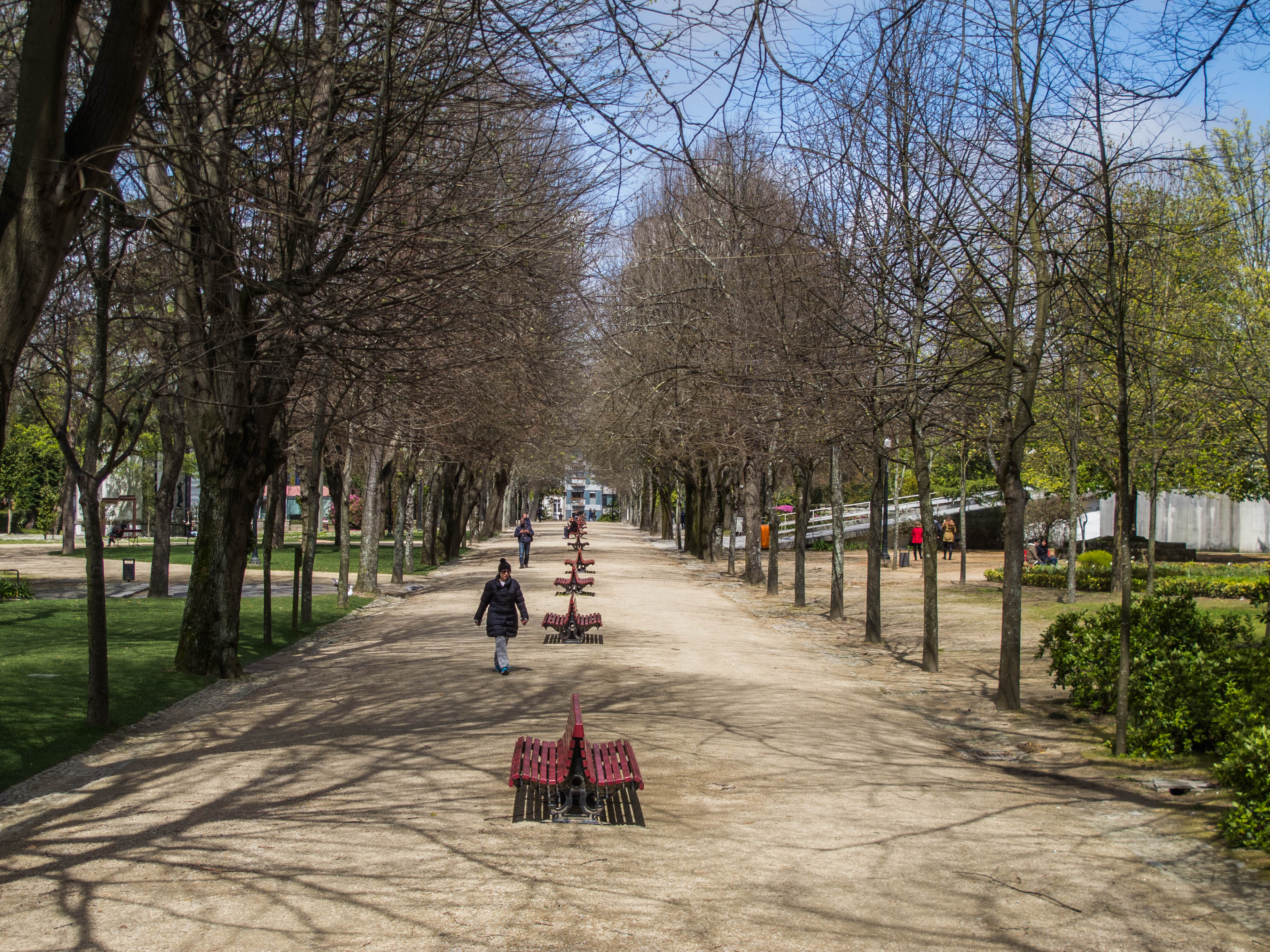 Going around the pavilion, from its left side, we can go downwards, surrounded by camellias, towards a series of landscaped terraces with magnificent views of Douro river, Porto, and Vila Nova de Gaia. In the first terrace, there is a rose garden, Roseiral in Portuguese, where we can see some architectural elements, such as doors, windows, and a heraldic crest, that came from Porto’s previous Town Hall building, located a century ago, in Avenida dos Aliados. Close to it, facing the river, there’s a yellow building, Casa do Roseiral, the official residence of the Mayors of Porto. Although nobody lives there, current Mayor Rui Moreira, has recovered it to protocol events and uses it for some official visits. 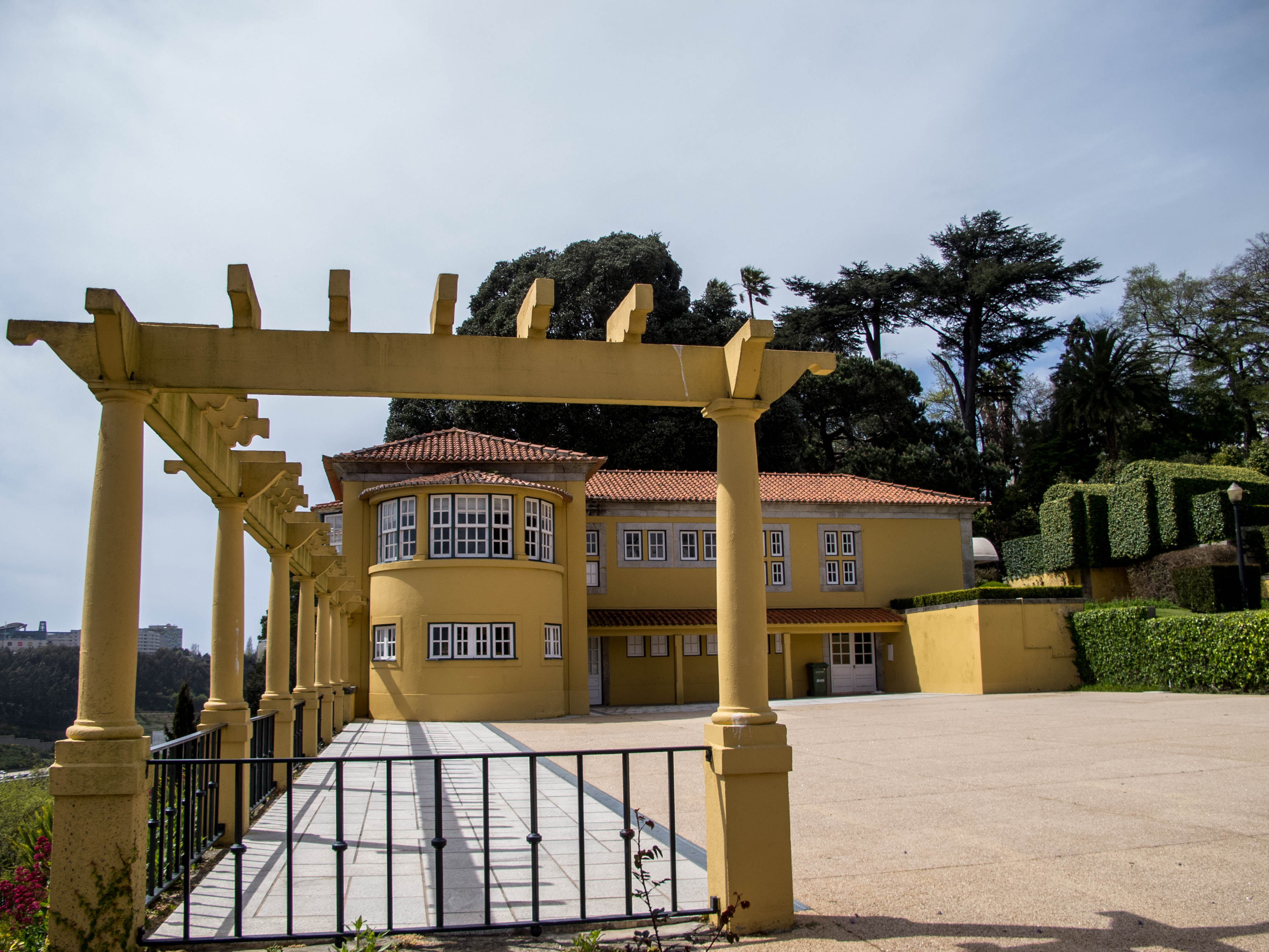 On the West side of Palácio de Cristal, there’s an access to Quinta da Macieirinha, an old eighteenth-century farmhouse where Carlos Alberto spent the last years of his life.  Nowadays it holds Museu Romântico, a space dedicated to the Romantic movement, Porto’s bourgeois nineteenth-century lifestyle and, of course, Carlos Alberto. The house is lovely and can be a good option for a rainy day. On the front gate of this area, there’s another one that will lead you to  Casa Tait, another farmhouse with beautiful gardens and century-old trees. 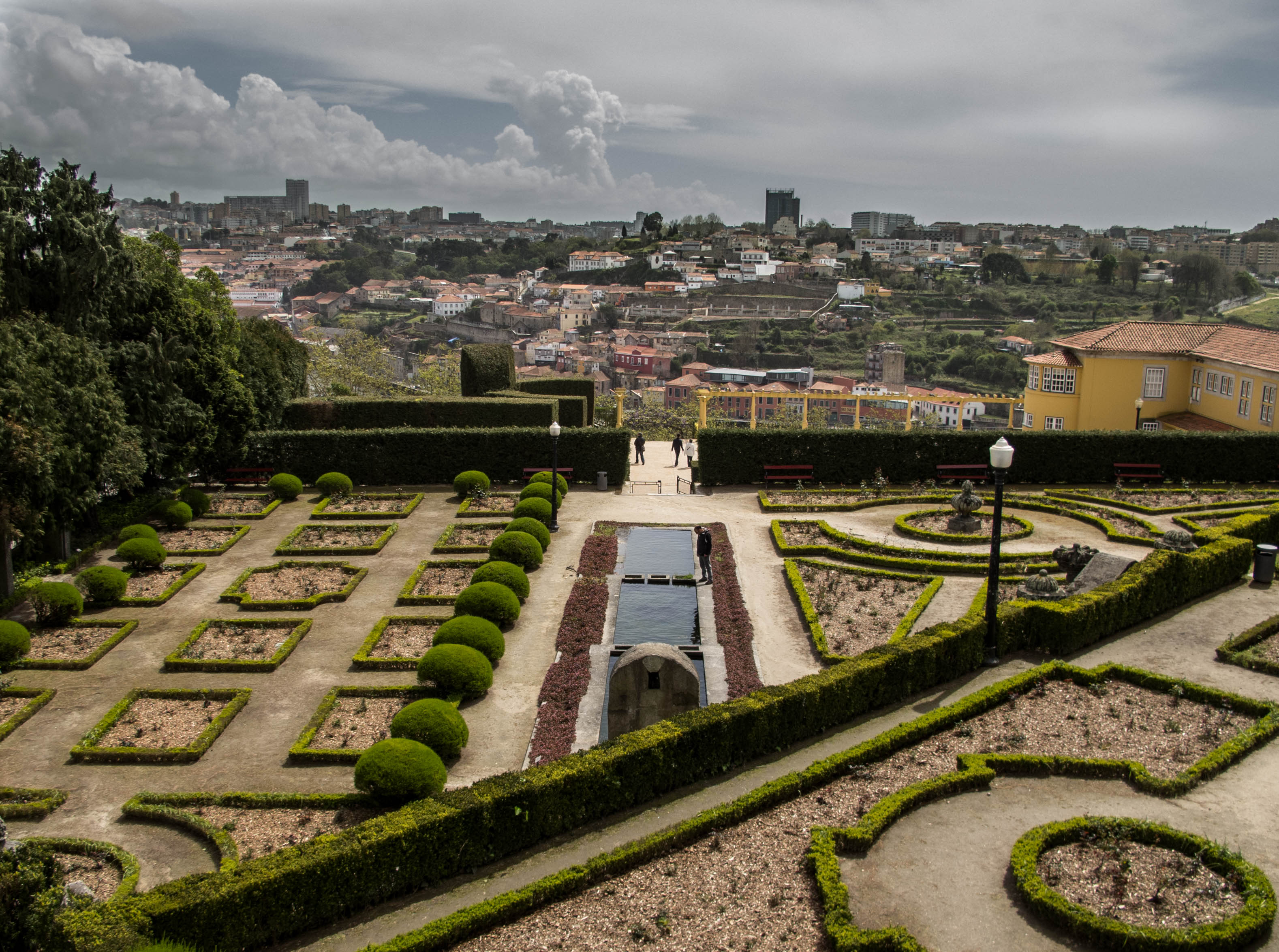 A good way to end this visit is to follow one of the romantic routes, starting next to Palácio de Cristal, and go down towards Massarelos,through narrow streets and some steps that show us to the rural past of this area. You can always ask our help to integrate this in a Porto Beginners Guide tour.