Queima das Fitas in Porto is the biggest University celebration a bit like Spring Break, that lasts one week every year, preparing college students for the upcoming exams.

Queima das Fitas in Porto started, officially, in 1944, taking over  a previous event called Festa das Pastas. Every year, Porto had this party except in the period between 1971 and 1978 and grew considerably in events within the event and on the number of people that attend it. It is held on the first week of May in several locations in town, from Avenida dos Aliados to Queimódromo, close to Parque da Cidade. 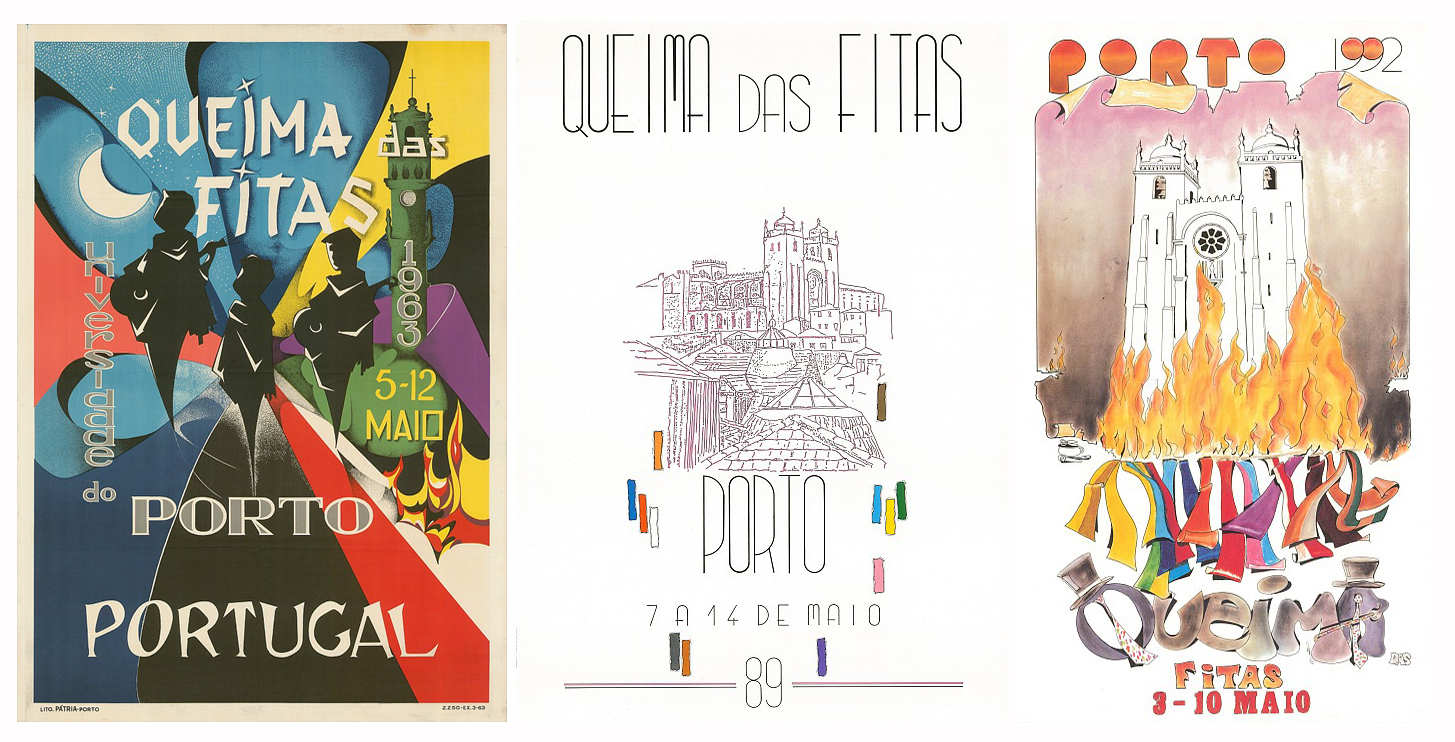 But what is Queima das Fitas and what can you do in it?

For most of the college students is the most anticipated moment of the Academic life, if you are a freshman or a senior, and for all the students in between, also. It’s the moment when you are officially part of the Academy or the official goodbye to all the good things that student’s life has.

For FAP, the college students federation responsible for all the preparations for this party, it’s an event that has a lot of activities, creating cohesion between all the colleges belonging to the University of Porto and some money to fund the FAP activities throughout the year. For this, all the courses in each college can have a bar, called barraquinha, ran by students, in Queimódromo. These bars, around 120, are built and decorated by the students that own it and usually have strange names with double meaning (most of them). One of the “mandatory” features is that each bar has a different shot drink with a special feature or name.

Commonly associated with Praxe Académica, Queima das Fitas is no longer exclusive to students, allowing family, friends and general public to attend some events. Don’t be surprised to see a lot of people dressed in black suits during this week, it’s called Traje Académico, part of Praxe and it has already inspired some myths.

The next thing you need to know is that each and every college in town has different colors associated: Medical College – yellow; Science College – light blue; Arts College – dark blue; Architecture College – white. 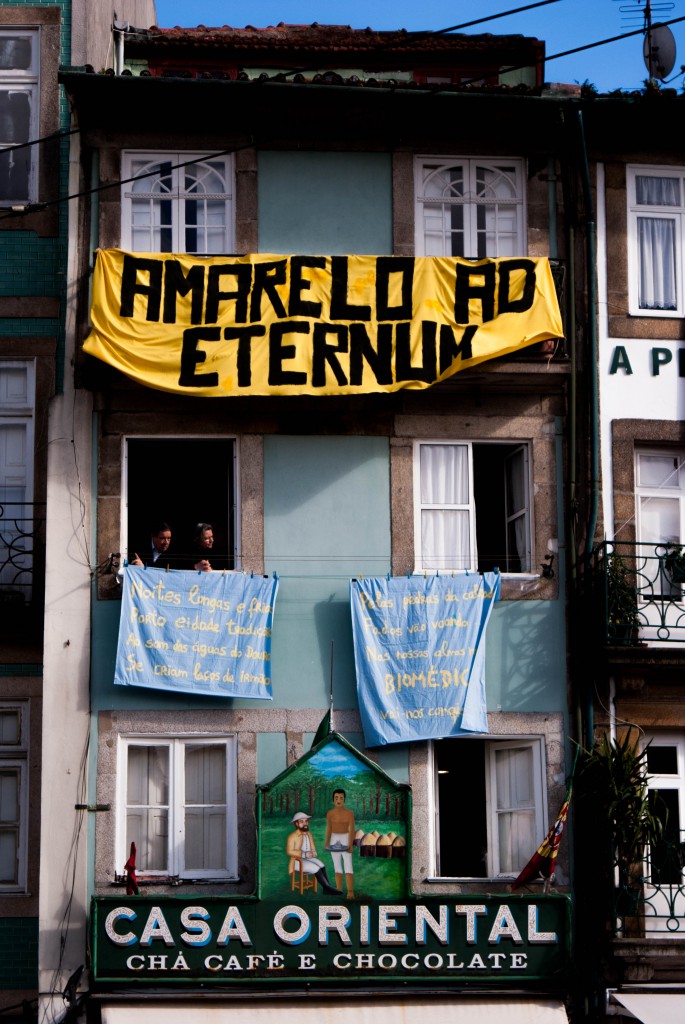 Banners representing the colors of Medical and Science Colleges.

Now that you are ready, with this introduction, let’s see what can you expect.

It all starts Sunday evening at 00.01 with the Serenata, a Fado concert, performed by students for an estimate  55.000 colleagues and all the people that can fit in Avenida dos Aliados, in front of the Town Hall. The Fado performed is a very special one, called Fado de Coimbra with lyrics that represent farewell and goodbye to the students life.

After this contemplation moment, all hell breaks loose and there’s a roaming mob of black cloaks heading to Queimódromo, the official place to listen to some music while drinking. For most of the mortals, Queima is like a music festival where you can attend some concerts and have some drinks. For the majority of people, is a place where you can go and drink, meet people from other colleges, drink again, break up with your better half and have a lot of fun. And drink some more.

Students can get their tickets for Noites da Queima in advance (cheaper) or at the entrance with the general public and huge cues,  a bit more expensive. To know which concerts to attend, there’s the official lineup that you can check called Cartaz da Queima.

Next morning, after sobering up a notch, its time to meet your family and go to Missa da Benção das Pastas in Avenida dos Aliados. There’s a particular item that is blessed in this ceremony, a black leather folder, that traditionally students use to carry their books, called Pasta and were they attach the Fitas (stripes). These Stripes give the name to the party, Queima das Fitas, meaning burning of the stripes. 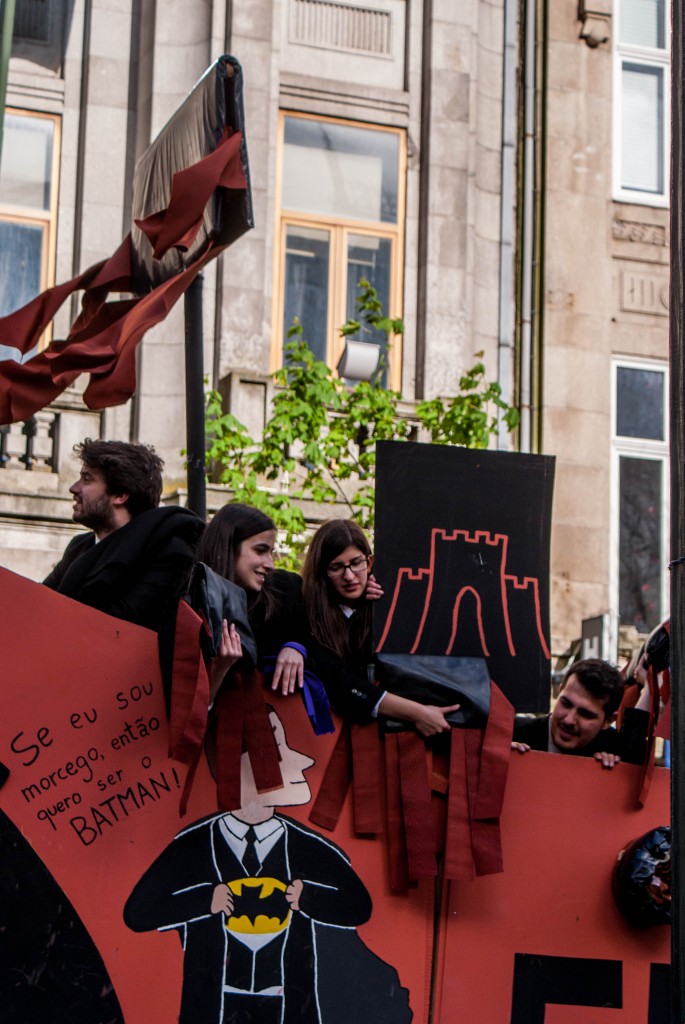 Third-year students of Engineering School, and their Pastas.

And then comes Monday with nothing special to do except going to Queimódromo to relax and prepare for the highlight of every Queima which is held Tuesday, the Cortejo Académico. 90.000 students from the nearly 30 colleges which are part of the University of Porto, will attract half a million people that clog Porto’s center streets, starting Tuesday at 14:00 and ending up Wednesday at 2:00. The big parade has some basic rules:  each college has a float commanded by Doutores (third-year students); in front of the car, walking, the Finalistas (Seniors) with their canes and top hats and behind the car, singing and making choreographies, the Caloiros (freshmen).

All the bars and restaurants in this area will have plenty of tap beer to hold the thirst of all these people. I can tell you that this is probably the only moment when parents are proud of seeing their kids drunk.

The parade ends in front of the City Hall were, in the tribune, the Dux Veteranorum (the leader of Porto’s Academy) together with Porto’s Mayor and more notable people will receive the salutations from all the colleges. 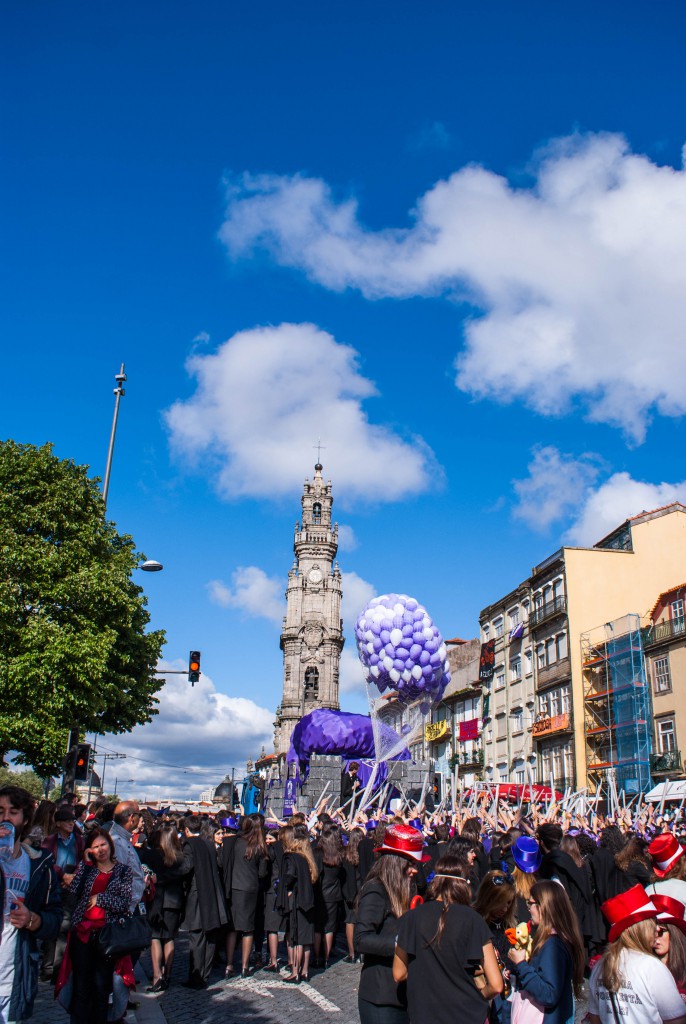 Wednesday evening is time for FITA – Iberian Festival of Tunas – no, it’s not about large fish that we usually put on a can. Tuna is a group of students that play traditional instruments and each college has, at least, one.

To close the week, on Sunday, traditionally we have Garraiada, a kind of bullfight with cows and a big bull. Colleges have teams to face the beasts and there’s always a winner each year. In 2016, there will be no more Garraiada because the Academy decided to end it  after an online petition gathered more than 5.000 signatures.

And after this everybody will have a huge hangover and will have to study hard to do well on the  second round of exams that will close the year. Academic activities will pause until the return of the students in September with Recepção ao Caloiro (the welcoming of the freshmen).