Folar is a Portuguese sweet egg bread that you can find in Porto’s bakeries during Easter, but do you know it has Jewish roots?

Folar has two different meanings in Portuguese. First, it refers to a kind of bread that can be sweet or savory, depending on the area of the country. The second meaning is linked to the first and it refers to a catholic tradition were, on Palm Sunday the children would give an olive tree branch to the godfathers and, one week later, on Easter Sunday, they would receive the Folar – the kind of bread mentioned above. This gift, nowadays, was replaced by a more practical Euro bill which also got the name Folar.

When I was a youngster I remember vividly, anticipating Easter and meeting with my godmother, that was proud to give me my gift. Back then I took everything for granted and I always thought that Good Friday was the prelude to Páscoa (Easter) and Pascoela (Easter Monday), with all the food and treats, and that everything was exclusive of being part of a catholic family.

This past week, I decided to do some research about Portuguese Easter pastry’s and foods and I found out interesting facts that put things in perspective.

So, basically, we can divide Folar into two kinds, the sweet and the savory. The savory is, usually from a region called Trás-os-Montes and include a lot of smoked ham, Chouriço, bacon and some more Pork meat. The sweet Folar has a very simple recipe and features an egg on top and can be found in Beira Litoral and Beira Interior, and also in some parts of Trás-os Montes. The interesting thing is that this kind of bread egg is popular in areas with an intense Marranos presence – the crypto-jews that remained in Portugal after the edict of expulsion in 1496. 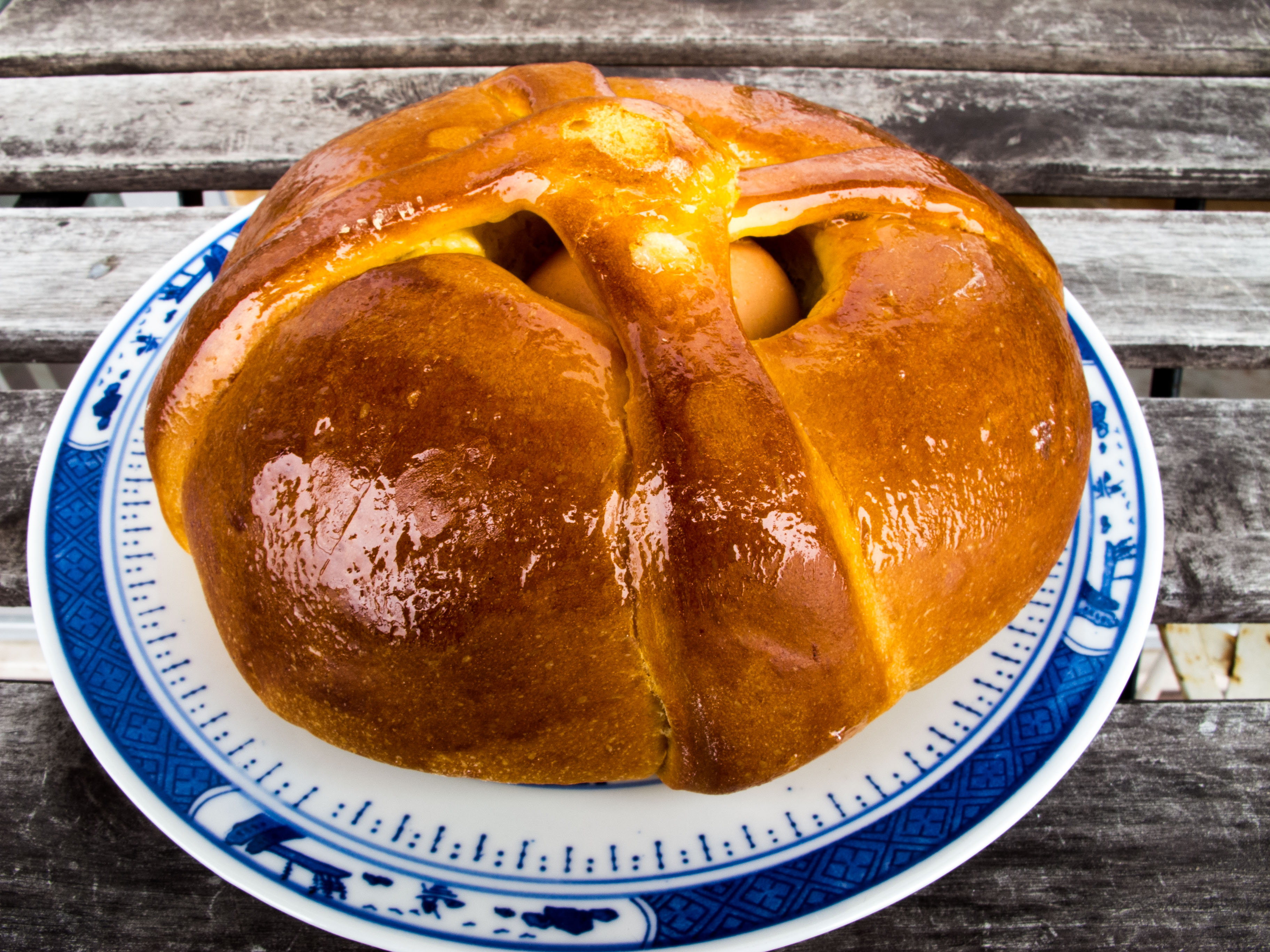 And this takes me back to putting things in perspective. While reading this interesting article about Sephardic Purim customs, I’ve found out that the widespread and traditional catholic sweet Folar is also, in Jewish tradition called Huevos de Haman or Foulare (scarf /enwrapping in Ladino language) and that, the egg wrapped in dough represents Haman in a jail cell.

Purim celebrates the victory of Queen Esther and her uncle Mordecai, over Haman, who tried to destroy the jews from the Persian Empire, as it is described on the Megillah of Esther.

This particular Festival is held at late Winter, beginning of Spring, and it has some traditions, like giving money to poor people, sending gifts of food, drinking a lot of alcohol and eating traditional Purim food like the Hamantaschen and, for Sephardic Jews, Folar.

For Portuguese Catholics, Folar has a legend behind it, a very simple one by the way, almost like a children’s tale. The bread is mandatory on Easter Sunday and it has a very simple recipe.

With some luck, while you are in Porto  you can get another kind of Folar, from a specific area called Fornos de Algodres, and that, believe it or not, is another link between Jewish and Catholic traditions. For Jewish is a braided bread that is eaten on Shabbat and in every Jewish Holiday, from Hannukah to Yum Kippur and it is called Challah. It is also eaten in Pessach (Passover) which in Portuguese means Páscoa – that puts things in perspective!

If you want to discover a little bit more of Porto’s Jewish Heritage, contact us and we will be happy to show you around.